Onward, unto the material breach 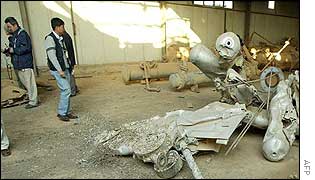 My buddy, George Paine at warblogging.com, alerted me to a report in the Washington Times that the Bush administration will declare Iraq in material breach of UNSCR 1441 immediately after Iraq submits its report on its weapons of mass destruction Saturday.
“‘It is going to be “material breach,” not as a casus belli [cause for war] but as a basis to begin hammering Unmovic to do more,’ said an administration official familiar with the internal debate,” the paper says.
Right. And the United States will be satisfied if UNMOVIC declares to the Security Council the Iraq is complying. Keep dreaming.

I don’t know about you, but I’m not looking forward to John Negroponte, America’s U.N. representative, pulling an Adlai Stevenson on Iraq. (Stevenson dramatically proved the Soviets were lying about their missiles in Cuba in October 1962. “”Do you, Ambassador Zorin, deny that the U.S.S.R. has placed and is placing medium and intermediate range missiles and sites in Cuba?” he demanded before the world.)
But let’s look at what’s happening here. The United States’ defense posture is to suffer no military rivals. It’s also got a strategic national interest in the oil reserves in the Persian Gulf. Iraq, while not a serious military rival, is bumping up against both of these pillars of the new, muscular American foreign policy. However, if Iraq were to acquire weapons of mass destruction, it would become a military rival not because its weapons would be offensive in nature (they wouldn’t and it’s unlikely Saddam would risk giving them to terrorists) but because he could bully his neighbors (thus, impacting America’s interests there) and deter the United States from countering his actions militarily. So, in the Bush Universe, he must be stopped. And the only reliable way to do that is to take him out.
The United States has become caught in its own escalation of power. It asserts to the world that it will remain a global hyperpower. But in order to do so it must defeat all challengers to the pax Americana, or better yet, discourage other powers from even attempting to challenge it. War against Saddam Hussein, in addition to America’s short term goals, is a demonstration to the world. The United States is telling potential powers, such as China, “Do not attempt to deter our military ability or we will crush you.” America is going to war to prove that it is willing to go to war.
And that’s just crazy! Having the unrestricted ability to wage war has become a major of goal of American foreign policy. This is what I mean by an escalation of power. We have to wage war to ensure we can wage war. Funny, I always thought the point of diplomacy was to avoid wars, not ensure that the option is always open.
This will lead to overextension of our armed forces, a more dangerous world and restlessness among the natives, old chap.
I’m often asked by people I talk to about this, “Do you really think we’ll go to war?” I always answer, yes, I do. Because with our defense posture, we can’t afford not to. Karl von Clausewitz said in “On War,” “War is regarded as nothing but the continuation of state policy with other means.” What happens, though, when state policy becomes the ability to wage unrestrained war?