Disturbing story here. BBC reporter Katie Adie claims a source in the Pentagon told her that satellite uplink positions of independent journalists in Iraq would be targeted in a war.

I was told by a senior officer in the Pentagon, that if uplinks — that is the television signals out of… Baghdad, for example — were detected by any planes … electronic media… mediums, of the military above Baghdad… they’d be fired down on. Even if they were journalists.

Naturally, I found this alarming, because filing with a satellite phone and laptop is part of my plan, although much of my time would be spent in Iraqi Kurdistan, not Baghdad. So I called the Pentagon and spoke with the Army’s Lt. Col. Gary Keck in the public affairs office. 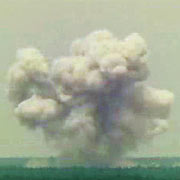 “I don’t have any information on anything like that at all,” he said. “But we’re certainly not going to talk about targeting processing in any way shape or form.”
Fair enough, I guess. Then he referred me to Lt. Col. Ken McClellan, an expert on electronic warfare. Unfortunately, he doesn’t come on duty until 7 p.m. EST tonight, so I’ll have to wait until later. But it has to be assumed that if someone turns on a cell phone — or a sat-phone — then the emitter will be picked up by American sensors. And if that signal is next to an Iraqi command and control center, and one that had just been bombed no less, then that’s probably not a smart thing to be, as American pilots would likely assume a survivor of the bombing was trying to continue calling in orders.

The question is, would the Americans be able to tell a journalist filing a story from a Republican Guard lieutenant calling in orders? I don’t know. When I talk to McClellan, I’ll have a followup to this.
The rest of Adie’s charges are pretty severe, however. She claims the Pentagon doesn’t care if it hits independent journalists, as “they’ve been warned,” she said. And that reporters being embedded with units have been vetted. “The Americans are: a) Asking journalists who go with them, whether they are… have feelings against the war,” she said. “And therefore if you have views that are skeptical, then you are not to be acceptable.”
“Secondly, they are intending to take control of the Americans technical equipment … those uplinks and satellite phones I was talking about. And control access to the airwaves.”
How true are these charges? At the moment, who knows? But perhaps McClellan can shed some light on the subject.
In other news, Opie writes in, “Stop it with your speculation! I just came upon this website, and have seen that you have tried to predict when this war will start. But, you are always wrong. I just read you wrote March 12-13 airwar? I don’t think so! This war ain’t going to happen till at least the 17th, but now it’s looking it could be pushed back by several days or weeks. We first need the UN to vote! And we would like approval, mostly because Tony Blair needs it. This war isn’t going to just happen now, out of the blue. It wouldn’t make sense, we need the vote to happen first! So please just stop it with the predictions, this war could be pushed for several more weeks.”
First of all, Opie sounds panicked and I hope he’s OK. He’s also right, in that the war predictions from me (and from others, I might add) have slipped mainly due to a) Turkish democracy mucking up the works and b) Tony Blair feeling the heat of the Labour party if there’s no new resolution. Blair is proposing to amend any new resolution authorizing war by putting hard benchmarks for Saddam to meet (inluding a televised mea culpa to the Iraqi people for his WMD!) and a deadline, although no one seems to have an idea of what that would be. The British want a short deadline while the swing countries on the Security Council want 45 days, which is unacceptable to the U.S. and the U.K.
White House spokesman Ari Fleischer said “the vote will take place this week,” although Spain’s foreign minister said the resolution might be withdrawn in the face of France’s veto threat.
Without that resolution, the U.S. is truly alone. Verbal support from countries like Latvia isn’t building a coalition, it’s forming a pep squad. The United Kingdom’s part in all of this is looking so shaky that U.S. Secretary of Defense Donald Rumsfeld admitted that the role of the U.K. is now dependent on that resolution.

Q: Sir, support for a possible war is shrinking rapidly in Great Britain. Would the — two questions. Would the United States go to war without Great Britain? And two, would the role of the British in an initial assault be scaled back?
Rumsfeld: This is a matter that most of the senior officials in the government discuss with the U.K. on a daily or every- other-day basis. And I had a good visit with the Minister of Defense of the U.K. about an hour ago. Their situation is distinctive to their country, and they have a government that deals with a parliament in their way, distinctive way. And what will ultimately be decided is unclear as to their role; that is to say, their role in the event that a decision is made to use force. There’s the second issue of their role in a post- Saddam Hussein reconstruction process or stabilization process, which would be a different matter. And I think until we know what the resolution is, we won’t know the answer as to what their role will be and to the extent they’re able to participate in the event the President decides to use force, that would obviously be welcomed. To the extent they’re not, there are workarounds and they would not be involved, at least in that phase of it. [Emphasis added]

(He later backpedaled after the U.K. acted surprised, but the upshot is pretty serious: No resolution, no Brits.)
And why? Well, aside from the leadership challenge that Tony Blair would almost certainly face, there’s also the matter of the International Criminal Court sworn in yesterday, of which Britain is a signer of the treaty establishing the court. And — surprise! — U.N. Secretary-General Kofi Annan yesterday said that war without U.N. auspices would “not be in conformity of the [U.N.] charter.” That means British troops could be brought up on war crime charges.
“International lawyers argue that any military attack that killed Iraqi civilians could lead to British soldiers being prosecuted at the new court,” writes Independent reporter Robert Verkaik. George over at Warblogging has an entry on this as well.
(I can just imagine the I-told-you-sos the White House is tossing across the Atlantic to No. 10 Downing St.)
So, to get back to Opie’s complaint (finally!). I no longer have any idea when this thing could go down. The new moon time is over until the beginning of April, but it’s hot and dusty then. When will the resolution come through? Ever? No one knows. The situation grows more chaotic by the day. So, Opie, in deference to your desperate plea, no more predictions.
By the way, click here to see a video of yesterday’s test of the 21,000-lb. MOAB (“Massive Ordinance Air Blast” or “Mother Of All Bombs”) bomb that might be used in Iraq.
21,000 pounds of explosives… That’s a lot.