Addendum to Iraqi use of WMD 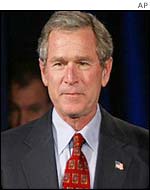 Previously, I metioned a report from MEMRI that quoted an “unidentified senior Iraqi official” as saying that Iraq would use chemical weapons and other weapons of mass destruction to repel the Yankee invaders. I don’t know why I didn’t think of this at the time, but hasn’t Iraq told the UNMOVIC folks it has zero, zero, zero WMD? Granted, this story is out of Al-Quds Al-Arabi, a London-based, pro-Saddam Arabic language paper, but still… This is very weird.
In related news, U.S. president George W. Bush warned Iraq again that it was in danger of being shitcanned if it didn’t cooperate with UNMOVIC. The signs from Iraq are “not encouraging,” Bush said. The signs? Cameras and gear tagged by inspectors in 1998 have been removed from the Karamah misslile site. This might be serious or it might indicate that desperate Iraqi soldiers had stripped the gear and sold it for extra money.
But Bush’s war mongering is more upsetting. The inspectors have been there, what? A week? Five days? And the deadline for accounting for all weapons isn’t until Dec. 8. Bush says he wants an international coalition to disarm Saddam, but he seems a twee impatient to get the shooting started now, Now, NOW. His constant warnings are unlikely to convince anyone except Britain, and his insistent sabre-rattling and undercutting of the inspectors will do little but convince the rest of the world of America’s bad intentions. Bush needs to shut the hell up and let the inspectors at least pretend to do their jobs.