The United States and Spain have revised the British Security Council resolution introduced last week to say that Iraq has until March 17 to disarm or face war. France, predictably, opposed the resolution and again hinted at veto. 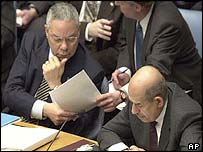 “This is the logic of war,” said Foreign Minister Dominique de Villepin. “We don’t accept this logic.”
Iraq, too, reacted with pique. “So they will give us only 10 days to give up all we have?” asked Iraq’s U.N. ambassador Mohammed Aldouri. “We have to dig all of our desert? Really, this is nonsense. We are doing our utmost. We can’t do more.”
This is a gutsy gamble by Tony Blair, who desperately needs a U.N. resolution to bolster his position at home where he is facing huge domestic opposition and a revolt within his own party. Without this resolution, Blair could face a no confidence vote. If he lost, he likely would be replaced by a more dovish Labour Party PM who would be expected to pull Britain out of America’s plans for Iraq.
By getting this on the table, Blair can at least say to his critics that he tried, possibly forestalling a challenge. (And — bonus! — he could blame the French, which is always popular in Britain.) By appearing to compromise, the United States hopes to pick up a few more votes on the Security Council and protect Blair’s left flank if it comes to a parliamentary vote anyway.
This is a switch in the U.S. position against the setting of deadlines. But why not? The U.S. isn’t risking much by agreeing to support this resolution because the United States is prepared to attack Iraq with or without U.N. support — its plan all along.
The primary issue is timing. The war could start at any time after today’s report from Hans Blix.When these resolutions even come to a vote next week, they will be vetoed by France, Russia or China and the United States and Britain will go to war. Already, air patrols in the north and south no-fly zones have been -doubled- tripled. U.S. marines, possibly in violation in international law, have been seen cutting holes in the fence in the DMZ separating Iraq and Kuwait. Equipment for the 101st Airborne Division began arriving in Kuwait Thursday, according to Stratfor, and if the air war begins next week as is expected, that’s enough time for preparations.
March 12-13. Air war anyone?

Bush attempts to make case for war, puts exile on the table